Note. This series of posts is also published as a Capgemini group white paper and published in Software Release Magazine (in Dutch, in two parts).

With the economy at a low point in time, organizations and project are clearly resetting their goals. Long term multimillion projects are being halted, in favor of short, agile projects, with feasible goals and good time-to-target. To realize these stringent goals, projects are striving for lower costs and higher productivity. On the one hand these goals might be reached by outsourcing, on the other hand standardization, industrialization and reuse could also contribute.

A long term promise in the field of increasing productivity and reuse is to handcraft less code, but to generate code from the project’s design or model. In general this is called model driven development

When is model driven development effective?

Although many alternative strategies exist towards model driven development, we feel that a pragmatic approach works best. The more theoretical an approach gets, the harder it is to apply it to projects. In this paper, we present such a highly pragmatic approach to model driven development. We model and standardize smart use cases and the domain model for a project, and generate code and other deliverables from these models using a straightforward tool set. This approach has proven to be very effective in many projects.

Model driven development can be effective when code and other deliverables can be generated rather than written or hand coded. Thus tedious repetitive work is avoided, such as creating web forms, user interface panels, domain objects, table create statements, service interfaces and even writing use case documentation. Developers can now focus on developing business logic, or tuning the user interface. We have witnessed very high productivity in projects that apply pragmatic model driven development. For example, a recent project (.Net) at a large Dutch government agency was realized in 20% of the time the customer estimated the project.

As it is also fairly easy to create new types of deliverables simply by investigating your existing code and derive template from this, we can save time and effort in many scenario’s and development environments. Model driven development has proven to be successful in (partly) generating solutions for various types of projects, including ASP.Net, Silverlight, SharePoint, Visual Basic Window Forms, Java, service oriented applications (.Net and SAP), and even back end functionality.

Moreover, as code generation is based on proven templates, generated code is of higher quality then hand written code. Thus, model driven development also contributes to lowering maintenance costs of delivered software. This effect is further increased because the documentation as presented in the model is directly traceable to the application’s code.

Last but not least, in model driven development, analysts and designer actively participate in delivering working software, as the models they help creating, are now directly converted into code. Model driven development is a collaborative scenario, where, especially in agile projects even end-users can participate directly in software development. To illustrate this, we usually model the smart use cases and the domain model that, underlie the software we produce, during interactive workshops with the end users, and generate working software either in these workshops, or shortly after. 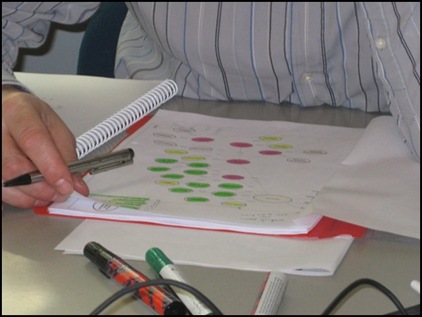 Generating code from a model can be done in a wide variety of scenario’s, and with a even wider range of goals and deliverables to strive for: